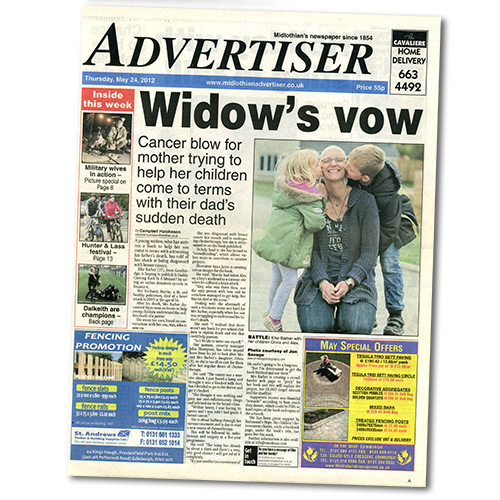 A young widow, who has written a book to help her son come to terms with witnessing his father’s death, has told of her shock at being diagnosed with breast cancer.

Elke Barber (37), from Gorebridge, is hoping to publish Is Daddy Coming Back In A Minute? By using an online donation system to finance it.

Her husband, Martin, a fit and healthy policeman, died of a heart attack in 2009 at the age of 34.

After his death, Mrs Barber discovered there were no books to help young children understand the sudden death of a parent.

She wrote her own, based on conversations with her son, Alex, who is now six.

She was diagnosed with breast cancer last month and is undergoing chemotherapy, but she is determined to see the book published.

To help fund it, she has turned to “crowdfunding”, which allows online users to contribute to creative projects.

Illustrator Anna Jarvis is creating colour images for the book.

She said: “Martin had taken Alex on a boy’s weekend to a caravan site when he suffered a heart attack.

“Alex, who was three then, was the only person with him and he somehow managed to get help. But Martin died at the scene.”

Dealing with the aftermath of such a traumatic event was hard for Mars Barber, especially when her son was struggling to understand his father’s death.

She said: “I realised that there wasn’t any book for pre-school children to explain death and one that could help parents.

“So I decide to write one myself.”

Her partner, security manager John Thompson, has taken unpaid leave from his job to look after Alex and Mars Barber’s daughter, Olivia (3), as she is too ill to care for them after her regular doses of chemotherapy.

She said: “The cancer was a massive shock. I just found a lump and thought it was a blocked milk duct, but I decided to go to the doctor and get it checked.

“She thought it was nothing and gave me anti-inflammatory drugs and referred me to the breast clinic.

“Within hours, I was having biopsies and I was told I had grade 3 breast cancer.”

She is about halfway through her current treatment and is due to start a new course of chemotherapy.

This will be followed by radiotherapy and surgery in a five-year programme.

She said: “The lump has shrunk by about a third and there’s a very, very good chance I will get rid of it completely.

“It’s just another inconvenience of life, and it’s going to be a long run.

“But I’m determined to get the book finished and out there.”

Mrs Barber is creating a crowdfunder web page to “pitch” for her book and this will explain the project, her £8,000 target amount and the deadline.

Supporters receive non-financial “rewards” according to how much they donate, which could be PDFs or hard copies of the book and copies of the artwork.

She has been given support by Richmond’s Hope, the children’s bereavement charity, while a Facebook page, under the book’s title, has gone live this week.