What to say when daddy goes forever 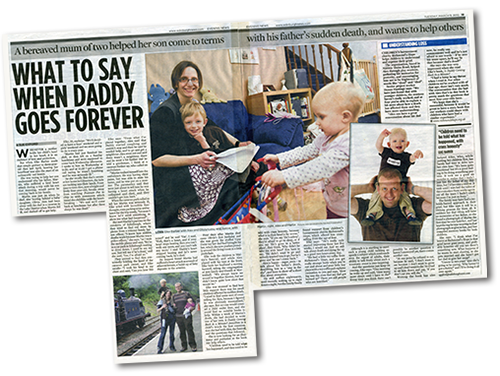 A bereaved mum of two helped her son come to terms with his father’s sudden death, and wants to help others

Whenever a mother holds her child’s head to her heart, it is an embrace of love and protection.

But when Elke Barber made that simple gesture to three-year-old Alex last April, hearing her heartbeat was also the start of an unbearably sad lesson.

She was trying to help her son understand why his father, Martin, who suffered a fatal heart attack during a trip with his son that morning, would never be coming back to his family.

Martin was just 34 when he died, also leaving behind a baby daughter, Olivia. Alex had been alone with his dad in a caravan in the Lake District when Martin fell ill, and dashed off to get help.

“Martin had just finished his shift, so they left on a Sunday lunchtime and were supposed to come back Wednesday afternoon. I spoke to him on Wednesday at 9:30, and at 11:30 I got a phone call saying he wasn’t breathing and he was seriously ill.”

As she recalls that day’s events at her home in Gilmerton, the kids are tucking into their lunch. From time to time Alex, now a bright and lively four-year-old, breaks away from watching Postman Pat to chip in with comments which blend the childlike with the heartbreaking – “We said we’d come back at lunchtime but after three sleeps he was dead.”

Elke says: “From what I’ve pieced together, Alex said that Daddy started coughing and couldn’t stop and then he said he needed help, and to go and get a neighbour. Alex went out and said there wasn’t a neighbour there and he went a bit further and he told a gentleman, I think at a caravan further up, who called an ambulance.

“Martin walked himself into the ambulance. He was having chest pains, but was able to state his name, and he was put on a monitor. The paramedics said they were just about to tell him he was having a heart attack when he collapsed and died, and they couldn’t get him back.”

When the caravan park called to tell her Martin was seriously ill, Elke acted with incredible forethought, even packing a toy ambulance for the trip south, “because I knew he’d need something to show me what had happened”.

She met Martin’s parents on the outskirts of Edinburgh, where they tried to find out more by phone from a reticent family liaison officer. “I know how sudden deaths work because Martin was a police officer,” she says, “so I took the mobile phone and said, ‘We’re in a car park in Edinburgh waiting to drive down. I need to see my son. Just tell me if he’s dead,’ and she said, ‘Yes, I’m afraid so.’”

They arrived to find Alex contentedly holding the hand of the caravan park owner, and Elke recalls: “I took his head to my chest and said, ‘Can you hear this noise?’ and he said ‘Yes’. I said, ‘Well, that’s a heart, and if your heart stops beating then you can’t walk any more, and you can’t talk any more.’ I said ‘Daddy’s heart stopped beating and he’s never coming back, he’s died.’

An inquest found Martin had suffered a heart attack as a result of atherosclerosis, a build-up of fatty deposits in the arteries.

Four days after Martin died came Olivia’s first birthday and she was given the stuffed Upsy Daisy toy her dad had brought for her, which she now pushes proudly around the living room in a little pushchair.

Elke took the children to Martin’s funeral, and while Alex played with his toys at the front, Elke bade her husband a moving farewell, telling the congregation of 300 family and friends at Mortonhall: “We always knew we would be together forever, but we didn’t know quite how short that would be.”

Elke was stunned to find how little support there was for small children affected by sudden death. “I tried to find some sort of counselling for Alex, because I figured he was obviously traumatised,” she says. But no-one would counsel a child under four, and she could find no suitable books to help. Within a week of Martin’s death, she had decided to write one of her own. Is Daddy Coming Back in a Minute? describes in a child’s words the first conversation she had with Alex, the funeral, and the questions that followed.

She is now looking for an illustrator and publisher so the book can help others.

“Children need to be told what has happened, and they need to be told with crass honesty, because what is in their head is far worse,” she says. “If you say ‘He’s asleep’, they’re afraid to go to sleep, or if you say ‘He’s gone to a better place’, they think, ‘Why didn’t he take me with him?’ You have to say, ‘He didn’t want to go, but he’s gone and he can’t come back.’”

Alex is happy – eager, even – to talk about his father’s death, describing him as a “star in the sky”, and keen to show off a short film about cremation.

He still suffers nightmares, until recently waking up to eight times a night, but the family finally found support from children’s bereavement charity Richmond’s Hope, which offered him counselling from the age of four.

Elke says: “He’s really only started improving these last five weeks, I would say. And we still talk about death and dying for up to a good two hours every day.

“He had a little toy coffin from Richmond’s Hope, and you get really strange looks when you’re out and about and your little boy plays with a toy coffin and explains cremation to you and says, ‘How big was the oven that my dad got burned in?’ There are still people who are horrified.”

Although it is startling to meet such a young child tackling so openly a subject which confounds even the sagest of adults, their ability to talk freely about such a traumatic event is awe-inspiring.

And the questions just keep on coming, Elke says: “One morning he woke up and said, ‘How many more sleeps until I have to die?’ Every time you think there can’t possibly be another question I haven’t answered yet, there comes another one.

Writing the book has also helped Elke, who, while putting her children first, has barely had time to delve into her own loss: “It’s been quite emotional but it’s a good feeling to be doing something positive. It took me a good six months to realise that I hadn’t just lost the father of my children, but I’d become a widow. It took until I watched the video of the cremation three weeks ago to cry all the tears I hadn’t cried, because I’m just so busy.”

The family may have had a no-holds-barred approach to their grief, but Elke says it will be a lifelong process for them all. It saddens her that Olivia will have no memories of her father, so she found a photograph of Martin the first time he ever held her, and has kept the top he was wearing in that photograph to give to her, and has compiled memory books for both children.

She says: “I think what I’ve learnt at Richmond’s Hope is that grief never goes away, and probably however old you are there’s something new. What happens if he wants to start shaving, or she gets married and she hasn’t got her dad to give her away?

“I know in two years’ time she’s going to be saying, ‘Why haven’t I got a daddy?’ and I’ll be doing it all over again.”

The organisation, based in Niddrie Mains Road, helped Alex through play sessions, gathering his memories for posterity, and encouraging him not to be frightened of words like “dead” and “died”.

Senior project worker Donna Hastings says: “We have just found that with younger children, the sessions haven’t really worked, and at four you’re able to explain a bit more about how a death has affected them and they have more understanding.

“Alex can have a great conversation about his dad now, he really can communicate well and he’s not afraid it use words – if he sees his mum upset, he’ll say ‘Is that because dad’s dead?”

She says she was very impressed when she read Elke’s book, Is Daddy Coming Back In a Minute?

“I had a lump in my throat when I read it. For other children we’ve worked with of that age, there isn’t very much. The conversations that she had with Alex that’s in this book is pretty much the questions that most four-year-olds have.

“We hope that she’s successful, because it would be great to have a story book that our workers could share with children who have had a similar experience.”