What it feels like to …
explain death to young children 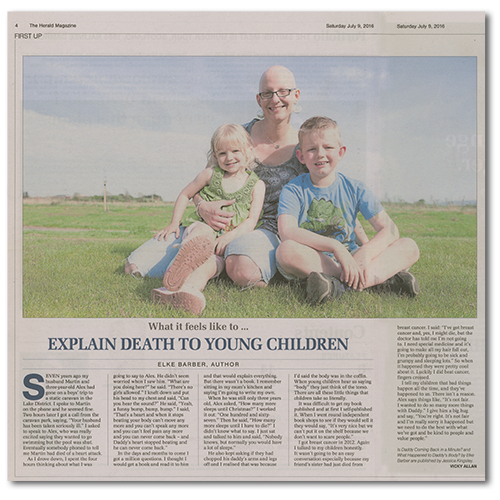 Seven years ago my husband, Martin, and three-year-old son, Alex, had gone off on a boys’ trip to a static caravan in the Lake District. I spoke to Martin on the phone and he seemed fine. Two hours later I got a phone call from the caravan park, saying, “Your husband has been taken seriously ill. He left in an ambulance.” I asked to speak to Alex, who came on and he was really excited saying they wanted to go swimming but the pool was shut. The caravan park didn’t even know what hospital Martin had gone to, nothing. Eventually somebody phoned me and told me he had died of a heart attack.

In the days and months to come I got a million questions. I thought I would get a book and read it to him and that would explain everything. But there wasn’t really a book. I remember sitting at my mum’s kitchen and saying I’m going to write my own. I couldn’t understand why it wasn’t there.

A couple of questions really threw me. When he was still only three years old, Alex asked, “How many more sleeps until Christmas?” I worked it out: “One hundred and sixty-seven.” Then he looked at me again and said, “And how many more sleeps until I have to die?” I didn’t know what to say. I just sat and talked to him and said, “Nobody knows, but normally you would have a lot of sleeps.”

He also kept asking if they had chopped his daddy’s arms and his legs off and I realised that was because I’d said that was the body that was in the coffin. When young children hear us saying body they just think of the torso. You need to make a point of saying it means the whole person. There are all these little things that children take so literally.

It was really difficult to get my book published, and at first I self-published it, though I’ve now got a publisher. There was a huge reluctance around it. When I went round independent book shops to see if they would sell it they would say, “It’s very nice but we can’t put it on the shelf because we don’t want to scare people.”

I got breast cancer in 2012. Again I talked to my children honestly. It wasn’t going to be an easy conversation especially because my friend’s sister had just died from breast cancer. What I said is “I’ve got breast cancer and, yes, I might die, but the doctor has told me I’m not going to. But I need some special medicine and it’s going to make all my hair fall out, I’m probably going to be sick and grumpy and sleeping lots.” So when it happened they were pretty cool about it. Luckily I did beat cancer, fingers crossed.

We’ve had a lot to deal with. I tell my children that bad things happen all the time, and they’ve happened to us. There isn’t a reason. Alex says things like, “It’s not fair. I wanted to do so many more things with Daddy.” I give him a big hug and say, “You’re right. It’s not fair and I’m really sorry it happened but we can’t change it and we need to do the best with what we’ve got and be kind to people and value people.”

Is Daddy Coming Back in a Minute? and What Happened to Daddy’s Body? by Elke Barber are published by Jessica Kingsley.