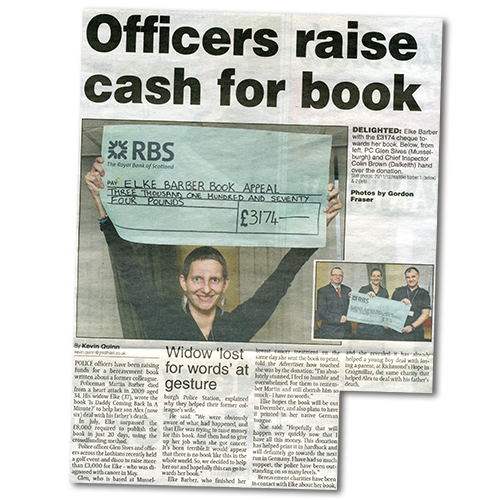 Police officers have been raising funds for a bereavement book written about a former colleague.

Policeman Martin Barber died from a heart attack in 2009 aged 34. His widow Elke (37), wrote the book ‘Is Daddy Coming Back In A Minute?’ to help her son Alex (now six) deal with his father’s death.

In July, Elke surpassed the £8,000 required to publish the book in just 20 days, using the crowdfunding method.

Police officer Glen Sives and officers across the Lothians recently held a golf event and disco to raise more than £3,000 for Elke – who was diagnosed with cancer in May.

Glen, who is based at Musselburgh Police Station, explained why they helped their former colleague’s wife.

He said: “We were obviously aware of what had happened, and that Elke was trying to raise money for this book. And then had to give up her job when she got cancer. It’s been terrible.It would appear that there is no book like this in the whole world. So, we decided to help her out and hopefully this can go towards her book.”

Elke Barber, who finished her breast cancer treatment on the same day she sent the book to print, told the Advertiser how touched she was by the donation: “I’m absolutely stunned, I feel so humble and overwhelmed. For them to remember Martin and still cherish him so much – I have no words.”

Elke hopes the book will be out in December, and also plans to have it printed in her native German tongue.

She said: “Hopefully that will happen very quickly now that I have all this money. This donation has helped print it in hardback and will definitely go towards the next run in Germany. I have had so much support, the police have been outstanding on so many levels.”

Bereavement charities have been in contact with Elke about her book, and she revealed it has already helped a young boy deal with losing a parent, at Richmond’s Hope in Craigmillar, the same charity that helped Alex to deal with his father’s death.