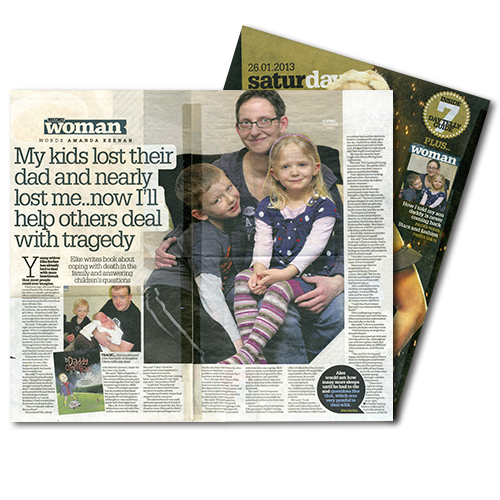 My kids lost their dad and nearly lost me… now I’ll help others deal with tragedy.

Elke writes book about coping with death in the family and answering children’s questions.

Young widow Elke Barber has already had to deal with more heartbreak than most people could ever imagine.

Four years ago, she was living a normal family life, looking after her then 11-month-old daughter Olivia, while her policeman husband Martin enjoyed a break at a caravan park with their three-year-old son Alex.

On the day they were due to drive home, she spoke to Martin at 9:30am. All seemed well. But just two hours later Elke received a message from the caravan site saying Martin was seriously ill.

She said: “I thought, this isn’t right, he seemed fine when we spoke. When I rang back they said Martin wasn’t breathing for himself and an ambulance was there. I kept thinking it’s not my husband, it can’t be, I was chatting to him a few hours ago.

“Martin was fit and healthy and I couldn’t understand why he’d fall critically ill.”

Desperate to discover how her husband, who was only 34, was, Elke began to phone all the hospitals until she found out where he was.

She said: ”I was in shock but I knew that I had to say calm. I found the hospital and I asked them to tell me straight was my husband dead. I told them that I was a policeman’s wife and I knew how these procedures worked and, as I was in Scotland, I had to know if my husband was dead or alive.

“They eventually told me he was dead.”

Devastated Elke, along with Martin’s parents, made the five-hour trip south.

“I was still trying to process that my husband was dead. We were together for 14 years. I felt guilty for not being there, although no-one could have predicted what happened.”

Elke, 38, from Gorebridge, Midlothian met up with Alex and he seemed to be coping. She said: “I don’t think he understood what happened. I knew I had to be honest.

“He asked if Daddy was coming back. I put his head to my chest and said, ‘can you hear this?’

“I said that ‘bump bump’ sound was a heart and that you needed it to walk and talk.

“I explained Daddy’s heart had stopped and he was gone.

“He asked where he was and I said some people like to think of dead people as up in the sky, like a cloud or a star. Alex said he didn’t want him to go and began to cry.”

The family were told Martin, who had never had any cardiac problems and cycled most days, had died of a heart attack.

Over the next few hours Elke was able to piece together Martin’s last moments. He had developed severe chest pains and sent Alex to alert neighbours.

An ambulance was called but he died at the caravan park.

She said: ”It happened so suddenly and I don’t know if Martin kenw he was going to die.

“I knew this was going to be very difficult. I was concerned with how Alex was coping. He’d ask hoe many more sleeps until he had to die and questions like that, which are very painful.”

Elke realised there was very little help to deal with children’s grief and decided to write her own book.

She said: “Alex’s response made me realise there was very little information available for preschool children who have lost a parent.”

Written from Alex’s viewpoint, Elke penned Is Daddy Coming Back In A Minute? To try and help other children find the answers her son craved. Although Elke explained to Alex his dad passed away, he would constantly ask when he was coming back.

She believes letting her children attend the cremation helped them gain an understanding of death.

She said: “I took picture of Martin in his coffin and when Alex asked questions I shoed him them and Martin’s ashes. I didn’t want to confuse him and decided to be honest. I explained he was up in the sky. I held Olivia while Alex played at the front with his little toys. It helped Alex to understand that Dad wasn’t coming back.”

The next few months were tough with Alex suffering from nightmares.

“I decided to put it in writing and each time Alex asked a question I would write it down and my response.”

Honest and easy-to-understand, her book helps parents and carers have the strength to find the right words.

Elke said: “You never think it’s going to happen to you, but we know many other people who have to live with this painful reality every day, just like we do.

“It is important to help children understand that it is okay to cry, to be sad, and to ask questions, but it is also okay to smile and be happy. They have a right to know, and it is our job to help them understand.”

It took Elke almost six months to deal with her own grief.

She said: “After Martin died I went into full mum mode. I had a little girl and boy to care for and that was my priority. I pushed my feelings to one side and just got on with it as best I could.

“One day I was married and the next I was a widow and single mum. It was very hard.”

Two years ago she was diagnosed with an aggressive form of breast cancer. She said: “My breast felt sore and lumpy so I went to the doctor and was told I had breast cancer.

“All I could think was my children were going to be orphans. It was a difficult time and because the treatment was making me ill, I knew I had to tell them.

“I said that I had cancer but said I was determined to beat it.”

After undergoing surgery, chemotherapy and radiotherapy, Elke is in remission and wants to live each day to the full.

She adds: “Life is so precious and I try to make each day count.

“I feel very lucky to be given a second chance.

“I have a new partner now and the kids adore him, although no one will ever replace their dad. Martin passed away in 2009 and Alex is now seven, and Olivia is four.

“They are fun-loving and happy and I believe part of that is down to being open and honest about their dad passing away.

“The past few years have been difficult but I hope my book can help other parents going through a similar experience.

“There is no right or wrong way to handle grief and kids know when something is not quite right.