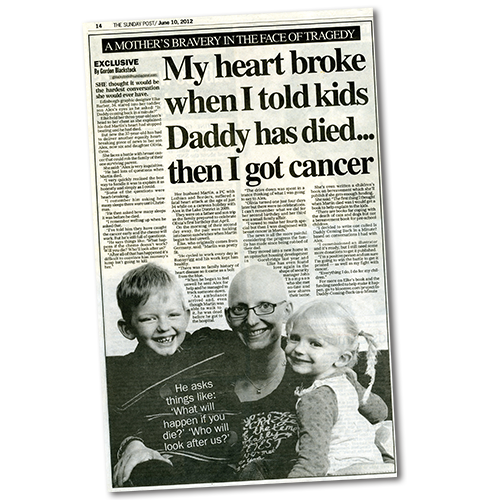 A mother’s bravery in the face of tragedy

She thought it would be the hardest conversation she would ever have.

Edinburgh graphic designer Elke Barber, 34, stared into her toddler son Alex’s eyes as he asked: “Is Daddy coming back in a minute?”

Elke held her three-year-old son’s head to her chest as she explained his dad Martin’s heart had stopped beating and he had died.

But now the 37-year-old has had to deliver another equally heart-breaking piece of news to her son Alex, now six and daughter Olivia, three.

She faces a battle with breast cancer that could rob the family of their one surviving parent.

She said: “Alex is very inquisitive.

“He had lots of questions when Martin did.

“I very quickly realised the best way to handle it was to explain it as honestly and simply as I could.

“Some of the questions were heart-breaking.

“I remember him asking how many sleeps there were until Christmas.

“He then asked how many sleeps it was before he died.

“I remember welling up when he asked that.

“I’ve told him they have caught the cancer early and the chemo will work. But he’s still full of questions.

“He says things like: ‘What happens if the chemo doesn’t work? Will you die? Who’ll look after us?’

“After all of that has happened it’s difficult to convince him mummy’s lump isn’t going to kill her.

Her husband Martin, a PC with Lothian and Borders, suffered a fatal heart attack at the age of just 34 while on a caravan holiday with Alex in the Lake District in 2009.

They were on a father and son trip as the family prepared to celebrate Olivia’s first birthday that April.

On the morning of their second day away, the pair were tucking into bacon sandwiches when Martin began to feel unwell.

“He cycled to work every day in Bonnyrigg and his work kept him healthy.

“There was no family history of heart disease so it came as a bolt from the blue.

“When he began to feel unwell he sent Alex for help and he managed to track someone down.

“An ambulance arrived and, even though Martin was able to walk to it, he was dead before he got to the hospital.

“The drive down was spent in a trance thinking of what I was going to say to Alex.

“Olivia turned one just four days later but there were no celebrations. I can’t remember what we did for her second birthday and her third was a small family affair.

“I vowed to make her fourth special but then I was diagnosed with breast cancer in March.”

The news is all the more painful considering the progress the family has made since being robbed of their dad.

They moved into a new home in an upmarket housing development in Gorebridge last year and Elke has even found love again in the shape of security manager John Thompson who she met on-line and now shares their home.

She’s even written a children’s book on bereavement which she’ll publish if she gets enough funding.

She said: “The first thing I thought when Martin died was I would get a book to help explain to the kids.

“There are books for coping with the death of cats and dogs but not a bereavement book for pre-school children.

“I decided to write one called Is Daddy Coming Back In a Minute? based on conversations I had with Alex.

“I commissioned an illustrator and it’s ready, but I still need some more donations to get it published.

“I’m a positive person and am sure I’m going to win the battle to get it printed – as well as my fight with cancer.

“Everything I do, I do for my children.”