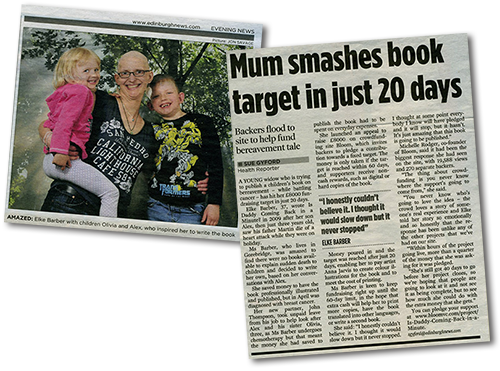 A young widow who is trying to publish a children’s book on bereavement – while battling cancer – has hit her £8000 fundraising target in just 20 days.

Elke Barber, 37, wrote Is Daddy Coming Back in a Minute? in 2009 after her son Alex, then just three years old, saw his father Martin die of a heart attack while they were on holiday.

Ms Barber, who lives in Gorebridge, was amazed to find there were no books available to explain sudden death to children and decided to write her own, based on her conversations with Alex.

She saved money to have the book professionally illustrated and published, but in April was diagnosed with breast cancer.

Her new partner, John Thompson, took unpaid leave from his job to help look after Alex and his sister Olivia, three, as Ms Barber undergoes chemotherapy but that meant the money she had saved to publish the book had to be spent on everyday expenses.

Money poured in and the target was reached after just 20 days, enabling her to pay artist Anna Jarvis to create colour illustrations for the book and to meet the cost of printing.

Ms Barber is keen to keep fundraising right up until the 60-day limit, in the hope that extra cash will help her to print more copies, have the book translated into other languages, or write a second book.

She said: “I honestly couldn’t believe it. I thought it would slow down but it never stopped. I thought at some point everybody I know will have pledged and it will stop, but it hasn’t. It’s just amazing that this book is going to be published.”

Michelle Rodger, co-founder of Bloom, said it had been the biggest response she had seen on the site, with 19,588 views and 270 separate backers.

“The thing about crowd-funding is you never know where the support’s going to come from,” she said.

“You never know who’s going to love the idea – the crowd loves a story of someone’s real experience and Elke told her story so emotionally and so honestly that the response has been unlike any of the other projects that we’ve had on our site.

“Within hours of the project going live, more than a quarter of the money that she was asking for it was pledged.

“She’s still got 40 days to go before her project closes, so we’re hoping that people are going to look at it and not see it as being complete, but to see how much she could do with the extra money that she gets.”