How could I tell my son his daddy wasn’t coming back? 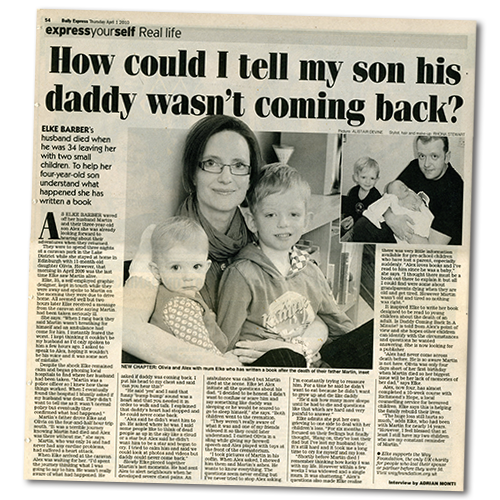 Elke Barber’s husband died when he was 34 leaving her with two small children. To help her four-year-old son understand what happened she has written a book.

As Elke Barber waved off her husband Martin and their three-year-old son Alex she was already looking forward to hearing about their adventures when they returned.

They were to spend three nights at a caravan park in the Lake District while she stayed at home in Edinburgh with 11-months-old daughter Olivia. However, that morning in April 2009 was the last time Elke saw Martin alive.

Elke, 35, a self-employed graphic designer, kept in touch while they were away and spoke to Martin on the morning they were due to drive home. All seemed well but two hours later Elke received a message from the caravan site saying Martin had been taken seriously ill.

She says: “When I rang back they said Martin wasn’t breathing for himself and an ambulance had come for him. I instantly feared the worst. I kept thinking it couldn’t be my husband as I’d only spoken to him a few hours ago. I asked to speak to Alex, hoping it wouldn’t be his voice and it was some sort of mistake.”

Despite the shock Elke remained calm and began phoning local hospitals to find where her husband had been taken. “Martin was a police officer so I knew how these things worked. When I eventually found the hospital I bluntly asked if my husband was dead. They didn’t’ want to tell me as it wasn’t normal policy but eventually they confirmed what had happened.”

Martin’s father drove Elke and Olivia on the four-and-half hour trip south. “It was a terrible journey knowing Martin had died and Alex as there without me,” she says.

Martin, who was only 34 and had never had any cardiac problems, had suffered a heart attack.

When Elke arrived at the caravan Alex was waiting for her. “I’d spent the journey thinking what I was going to say to him. He wasn’t really aware of what had happened. He asked if daddy was coming back. I put his head to my chest and said ‘can you hear this?’

“He said ‘yes’ and I said that funny ‘bump bump’ sound was a heart and that you needed it in order to walk and talk. I explained that daddy’s heart had stopped and he could never come back.

Slowly Elke pieced together Martin’s last moments. He had sent Alex to alert neighbours when he developed severe chest pains. An ambulance was called but Martin died at the scene. Elke let Alex initiate all the questions about his dad. “I decided to be honest. I didn’t want to confuse or scare him and say something like daddy was sleeping or he would be scared to go to sleep himself,” she says. “Both children went to the cremation.

“They weren’t really aware of what it was and one of my friends videoed it so they could later understand. I carried Olivia in a sling while giving my farewell speech and Alex played with toys at the front of the crematorium.

“I took pictures of Martin in his coffin. When Alex asked, I showed him them and Martin’s ashes. He wants to know everything. The questions seem never ending but I’ve never tried to stop Alex asking. I’m constantly trying to reassure him. For a time he said he didn’t’ want to eat because he didn’t want to grow up and die like daddy.

“He’d ask how many more sleeps until he had to die and questions like that which are hard and very painful to answer.”

Elke admits she put her own grieving to one side to deal with her children’s loss. “For six months I focused on their feelings but finally thought, ‘Hang on, they’ve lost their dad but I’ve lost my husband too’. It’s still hard and it took me a long time to cry for myself and my loss.

“Shortly before Martin died I remember thinking how lucky I was with my life. However within a few weeks I was widowed and a single mum. It was shattering.” Alex’s questions also made Elke realise there was very little information available for pre-school children who have lost a parent, especially suddenly. “Alex loves books and I’ve read to him since he was a baby,” she says. “I thought there must be a book out there to explain it but all I could find were some about grandparents dying when they are old and get tired. However Martin wasn’t old and tired so nothing was right.”

It inspired Elke to write her book designed to be read to young children about the death of an adult. Is Daddy Coming Back In A Minute? is told from Alex’s point of view and she hopes other children can identify with the circumstances and questions he wanted answering. She is now looking for a publisher.

“Alex had never come across death before. He is so aware Martin is not here. Olivia was only four days short of her first birthday when Martin died so her biggest issue will be her lack of memories of her dad,” says Elke.

Alex, now four, has almost completed a 10-week course with Richmond’s Hope, a local counselling service for bereaved children. Elke says this is helping the family rebuild their lives.

“The huge loss still hurts so much,” adds Elke, who had been with Martin for nearly 14 years. “However, I feel blessed that at least I still have my two children who are my constant reminder of Martin.”