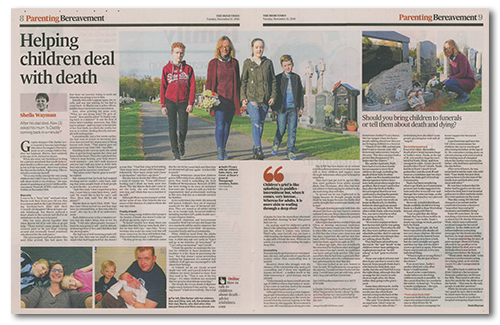 After his dad died, Alex (3) asked his mum ‘is Daddy coming back in a minute?’

Graphic designer Elke Barber never wanted to become knowledgeable about the impact of bereavement on very young children but, after her husband Martin died suddenly at the age of 34, she had no choice.

When she went into bookshops looking for a picture storybook that would help explain death to a three-year-old, staff looked at her as if she was mad – there was nothing like that on the shelves. Right away, Elke resolved to write one herself.

“It’s a very tricky concept for very young children but I didn’t have the luxury to not talk about death to my children,” she tells Health+Family, ahead of speaking at an Irish Childhood Bereavement Network conference in Dublin on November 18th.

It was to be a “boys’ only” weekend when Martin took their three-year-old son Alex to a caravan park in the Lake District, leaving German-born Elke and their 11-month-old daughter Olivia at home outside Edinburgh. But he suffered a heart attack in the caravan and died in an ambulance on the way to hospital.

She has since pieced together that when Martin fell ill he told Alex to go and get help.

“There weren’t many people in the caravan park so he just kept running around and eventually found somebody who phoned for the ambulance.”

The caravan park staff looked after Alex until Elke arrived. She had spent the four-hour car journey trying to work out what she was going to say to him.

Initially he didn’t appear upset, she recalls, and was just waiting for his dad to come back. As Martin was a police officer, sudden departures were not uncommon.

Alex, after greeting his mum with, “What are you doing here? No girls allowed!”, then quickly asked “Is Daddy coming back in a minute?” It was the first of many heart-rending questions that Elke had to answer – and was later to be the title of her first book, on which she credits her son as co-author, dealing directly and simply with such queries. .

Coincidentally, just a few weeks earlier, she had read an article on bereaved children that stressed the importance of being honest with them.

“That almost gave me permission to say what I felt,” says Elke. Standing in the caravan park, she asked Alex to put his head against her chest and listen to her heart. Then she explained that “when it stops beating, your body doesn’t work anymore – you can’t walk anymore and you can’t talk any more or tickle little boys any more. Daddy’s heart has stopped beating and he can never come back”.

“But where is he? Has he gone to work?” he replied.

She repeated that his body had stopped working and he couldn’t come back, adding that some people think of dead people as up in the sky – as a cloud or a star.

Both children went to the cremation service but she didn’t bring Alex to see the body. “I did take photographs because I knew he was going to ask – and he did ask, at about age four or five, and I did show him the photographs.”

She had lots of well-meaning people telling her that Alex was too small to understand what had happened but she doesn’t accept that.

“I had him lying in bed saying ‘how many more sleeps until Christmas?’ followed by ‘how many sleeps until I have to die mummy?’ and that’s age three.”

She also has no doubt that Olivia shared a sense of trauma too. “I was still breastfeeding and I think my body went into shock. The day Martin died and I went to see the body, she was violently sick, non-stop, and I think that was a reaction to my milk.”

Although Olivia was too young to verbalise her sense of loss, Elke believes she was aware of the absence of a dad to whom she was very close.

The one thing young children don’t grasp is the finality of death; that doesn’t come until about age seven, eight or nine.

“It doesn’t matter how many times you explain that they’ll never come back, that’s the bit they don’t get,” says Elke. “Every birthday they make the same wish that will never come true but they still believe that, if they wish hard enough, it will happen.

“As they grow up, comes the realisation that he can never come back and then they are devastated all over again – it is horrible to watch.”

Raising awareness about how children grieve differently from adults and the supports they need is something the Irish Childhood Bereavement Network (ICBN) has been trying to do since its inception four years ago. It acts not only as a hub for organisations and professionals working in this area, but also as a central resource for families.

At its conference this week, the network will launch Ireland’s first set of national standards for the care of bereaved children. They are aimed at all adults caring for, or in contact with, bereaved children, including teachers, GPs, public health nurses and religious leaders.

Network chairman and bereavement counsellor Brid Carroll says she hopes the new standards will be used to empower the natural supports of the child – the parents, extended family and local community.

What children need from the adults around them is information and normalisation. A child may ask very early on “can I still go to my matches on Saturdays?” or “can I still go swimming?”, explains Carroll.

“I think the quicker we maintain the routine for children in these situations, the healthier it is for them in processing the loss.” But that doesn’t mean pretending nothing has happened; it’s essential that children of all ages are encouraged to talk about their feelings.

In Ireland, we do our rituals around death very well, and Carroll believes that children are more included in these than they used to be.

“That is one of the key things – it’s when children are excluded that we get a lot of problems occurring.”

She recalls the recent death of Munster rugby coach Anthony Foley and the “amazing impact” it had on everybody. She is full of praise for how the immediate aftermath was handled, showing “at last” that grown men can cry.

An analogy used for children’s grief is that it’s like splashing in puddles – intermittent but, when it comes, very intense. That’s why, says Carroll, you can have a child weeping one minute and skipping out to play with a friend the next. Whereas for adults, it is more akin to wading through a deep river.

Normalising the grief process is very important, she says, and generally it’s psycho-education rather than counselling that is needed.

However, those who struggle with the absence of the relationship may need grief counselling and if there was significant trauma involved – a sudden death or the child witnessing it – grief therapy may be advised.

“Unfortunately we have a small percentage of children where depression or anxiety has come in and they need to be treated by the mental health services.”

Although Irish society is good at supporting people immediately after a death, we’re not so good at explaining to the newly bereaved what the journey is going to be like from then on, she suggests. Bereavement is not a one-off event but an evolving process.

The IBCN has fact sheets on its website (childhoodberavement.ie) to help parents talk to their children and support them through milestones when grief is bound to resurface.

They don’t just get over it, agrees Elke, they need guidance from adults around them. One Christmas, after Alex had written a letter to Santa saying he wished to die, she had a long chat with him.

Through drawing pictures with him, she showed him how you don’t have to remove sadness from your heart about the memory of a loved one to allow happiness in; you just grow a bigger heart.

Elke hopes that she has enabled Alex and Olivia to develop emotional resilience. (There were more tough times for the family when Elke was treated for breast cancer in 2012 but she is four years clear now and has since remarried; she and her new husband John Thompson have seven children between them, aged from eight to 20.)

At about age eight, Alex was troubled by the idea that if he had been older and bigger at the time of his dad’s death, he could have run faster and got help quicker. Elke reassured him that he had done a great job; Martin was still alive when the ambulance came but unfortunately he was going to die that day.

“Alex just looked at me and, honest to God, he said, ‘if I had known he was going to die anyway, I would not have bothered running; I would have just sat with him, given him a hug and told him I loved him’.”

“Is Daddy Coming Back in a Minute?” and “What Happened to Daddy’s Body?” by Elke and Alex Barber are now published by Jessica Kingsley, £10.99, available from jkp.com