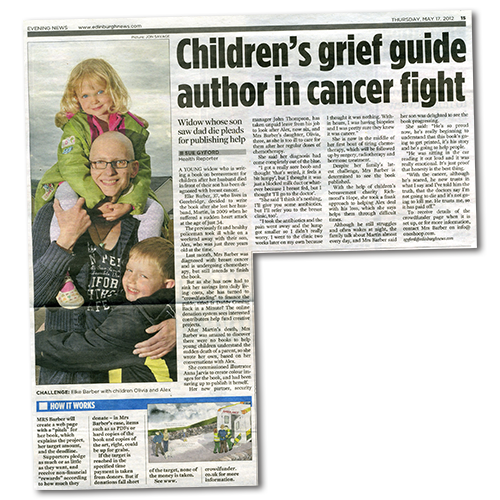 A YOUNG widow who is writing a book on bereavement for children after her husband died in front of their son has been diagnosed with breast cancer.

Elke Barber, 37, who lives in Gorebridge, decided to write the book after she lost her husband, Martin, in 2009 when he suffered a sudden heart attack at the age of just 34.

The previously fit and healthy policeman took ill while on a weekend away with their son, Alex, who was just three years old at the time.

Last month, Mrs Barber was diagnosed with breast cancer and is undergoing chemotherapy, but still intends to finish the book.

But as she has now had to sink her savings into daily living costs, she has turned to “crowdfunding” to finance the guide, titled Is Daddy Coming Back in a Minute? The online donation system sees interested contributors help fund creative projects.

After Martin’s death, Mrs Barber was amazed to discover there were no books to help young children understand the sudden death of a parent, so she wrote her own, based on her conversations with Alex.

She commissioned illustrator Anna Jarvis to create colour images for the book, and had been saving up to publish it herself.

Her new partner, security manager John Thompson, has taken unpaid leave from his job to look after Alex, now six, and Mrs Barber’s daughter, Olivia, three, as she is too ill to care for them after her regular doses of chemotherapy.

She said her diagnosis had come completely out of the blue.

“I got a really sore boob and thought ‘that’s weird, it feels a bit lumpy’, but I thought it was just a blocked milk duct or whatever because I breast fed, but I thought ‘I’ll go to the doctor’.

“She said ‘I think it’s nothing, I’ll give you some antibiotics, but I’ll refer you to the breast clinic, too’.

“I took the antibiotics and the pain went away and the lump got smaller so I didn’t really worry. I went to the clinic two weeks later on my own because I thought it was nothing. Within hours, I was having biopsies and I was pretty sure they knew it was cancer.”

She is now in the middle of her first bout of tiring chemotherapy, which will be followed up by surgery, radiotherapy and hormone treatment.

Despite her family’s latest challenge, Mrs Barber is determined to see the book published.

With the help of children’s bereavement charity Richmond’s Hope, she took a frank approach to helping Alex deal with his loss, which she says helps them through difficult times.

Although he still struggles and often wakes at night, the family talk about Martin almost every day, and Mrs Barber said her son was delighted to see the book progressing.

She said: “He’s so proud now, he’s really beginning to understand that this book’s going to get printed, it’s his story and he’s going to help people.

“He was sitting in the car reading it out loud and it was really emotional. It’s just proof that honesty is the best thing.

“With the cancer, although he’s scared, he now trusts in what I say and I’ve told him the truth, that the doctors say I’m not going to die and it’s not going to kill me. He trusts me, so it has paid off.”

Mrs Barber will create a web page with a “pitch” for her book, which explains the project, her target amount, and the deadline.

Supporters pledge as much or as little as they want, and receive non-financial “rewards” according to how much they donate – in Mrs Barber’s case, items such as as PDFs or hard copies of the book and copies of the art, right, could be up for grabs.

If the target is reached in the specified time payment is taken from donors. But if donations fall short of the target, none of the money is taken.