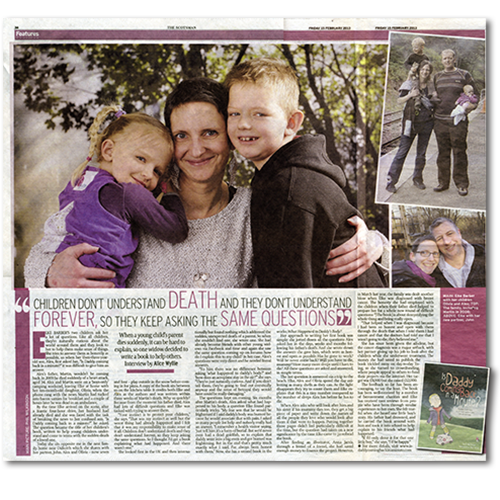 ELKE BARBER’S two children ask her a lot of questions. Like all children, they’re naturally curious about the world around them and they look to her to help them make sense of things.

She tries to answer them as honestly as possible, so when her then-three-year-old son, Alex, first asked her, “Is Daddy coming back in a minute?” it was difficult to give him an answer.

Alex’s father, Martin, wouldn’t be coming back. In 2009 he died suddenly of a heart attack, aged 34. Alex and Martin were on a ‘boys-only’ camping weekend, leaving Elke at home with her ten-month-old daughter, Olivia, when the phone rang with the news. Martin had tucked into bacon sarnies for breakfast and a couple of hours later he was dead in an ambulance.

By the time Elke arrived on the scene, after a frantic four-hour drive, her husband had already died and she was faced with the task of breaking the news to her confused son. “Is Daddy coming back in a minute?” he asked. The question became the title of her children’s book, written to help young children understand and come to terms with the sudden death of a loved one.

Today she sits opposite me in the neat family home near Dalkeith which she shares with her partner, John. Alex and Olivia – now seven and four – play outside in the snow before coming in for pizza. A copy of the book sits between us on the kitchen table. It credits both Elke and Alex as the authors and was written within three weeks of Martin’s death. Why so quickly? Because from the moment his father died, Alex had lots of difficult questions and Elke was tasked with trying to answer them.

“Your instinct is to protect your children,” she says. “That was my instinct as well but the worst thing had already happened and I felt that it was my responsibility to make sense of it all. Children don’t understand death and they don’t understand forever, so they keep asking the same questions. So I thought I’d get a book explaining what had happened. And there wasn’t one.”

She looked first in the UK and then internationally but found nothing which addressed the sudden, unexpected death of a parent. So when she couldn’t find one, she wrote one. She had already become friends with other young widows via Facebook and time and again she saw the same question coming up on forums: how do I explain this to my child? In her case, Alex’s questions were very direct and he needed literal answers.

“To him there was no difference between asking ‘what happened to daddy’s body?’ and ‘how does an aeroplane stay in the air?’” she says. “They’re just naturally curious. And if you don’t tell them, they’re going to find out eventually anyway and the sense of betrayal they would have could be really damaging.”

The questions kept on coming. Six months after Martin’s death, Alex asked what had happened to his body, a question Elke found particularly tricky. “My fear was that he would be frightened if I said daddy’s body was burned because he would associate that with pain. I asked so many people for help and nobody really had an answer. “I remember a health visitor saying, ‘Just tell him it’s a form of burial’. But we’d never even had a dead goldfish, so to explain that daddy went into a big oven and got burned was frightening. But in the end that’s pretty much exactly what I said. I’ve always been honest with them.” Now, she has a second book in the works; What Happened to Daddy’s Body?

Her approach to writing her first book was simple: she jotted down all the questions Alex asked her in the days, weeks and months following his father’s death. And she wrote down the answers she gave him, which were as honest and open as possible. Has he gone to work? Will he never come back? Will you have to die, mummy? How many more sleeps until I have to die? All these questions are asked and answered, in simple terms.

The last question is answered via a trip to the beach. Elke, Alex and Olivia spend the day collecting as many shells as they can. As the light disappears they try to count them and Elke explains that this is a tiny number compared to the number of sleeps Alex has before he has to die.

When Alex asks who will look after him and his sister if his mummy dies too, they get a big piece of paper and write down the names of all the people they love who would look after them if that were to happen. Putting together those pages didn’t feel particularly difficult at the time, but the question had taken on a new significance by the time Elke came to proofread the book.

After finding an illustrator, Anna Jarvis, through a friend of a friend, she had saved enough money to finance the project. However, in March last year, the family was dealt another blow when Elke was diagnosed with breast cancer. The honesty she had employed with the children when their father died helped to prepare her for a whole new round of difficult questions: “[The book] is about demystifying the whole thing and being really open.

“That helped when I was diagnosed because I had been so honest and open with them through the death that when I told them I had cancer and that the doctors had told me that I wasn’t going to die, they believed me.”

She has since been given the all-clear, but the cancer diagnosis was a major setback, with her partner giving up his job to look after the children while she underwent treatment. The money she had saved to publish the book trickled away on day-to-day living, so she turned to crowdfunding, where people appeal to others to fund their projects via the internet. Her target was £8,000 but she raised £12,000.

The feedback so far has been encouraging, to say the least. The book has been well-received by a number of bereavement charities and Elke has received rave reviews from people who have been through similar experiences to her own. She felt tearful when she heard one little boy’s story. His father had drowned, and he carried the book around with him and took it into school to help explain to his friends what had happened.