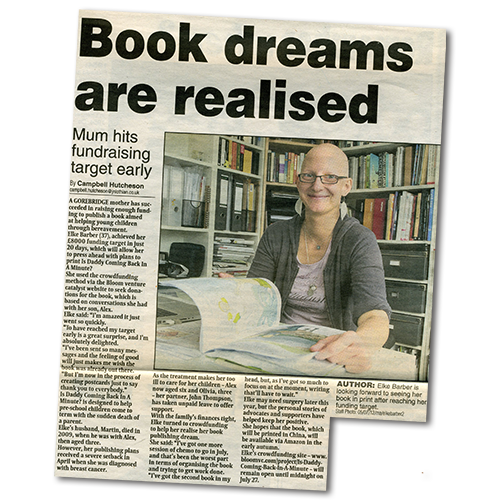 A Gorebridge mother has succeeded in raising enough funding to publish a book aimed at helping young children through bereavement.

Elke Barber (37), achieved her £8000 funding target in just 20 days, which will allow her to press ahead with plans to print Is Daddy Coming Back In A Minute?

She used the crowdfunding method via the Bloom venture catalyst website to seek donations for the book, which is based on conversations she had with her son, Alex.

“To have reached my target early is a great surprise, and I’m absolutely delighted.

“I’ve been sent so many messages and the feeling of good will just makes me with the book was already out there.

“But I’m now in the process of creating postcards just to say thank you to everybody.”

Is Daddy Coming Back In A Minute? is designed to help pre-school children come to terms with the sudden death of a parent.

Elke’s husband, Martin, died in 2009, when he was with Alex, then aged three.

However, her publishing plans received a severe setback in April when she was diagnosed with breast cancer.

As the treatment makes her too ill to care for her children – Ales now aged six and Olivia, three – her partner, John Thompson, has taken unpaid leave to offer support.

With the family’s finances tight, Elke turned to crowdfunding to help her realise her book publishing dream.

She said: “I’ve got one more session of chemo to go in July, and that’s been the worst part in terms of organising the book and trying to get work done.

“I’ve got the second book in my head, but, as I’ve got so much to focus on at the moment, writing that’ll have to wait.”

Elke may need surgery later this year, but the personal stories of advocates and supporters have helped keep her positive.

She hopes that the book, which will be printed in China, will be available via Amazon in the early autumn.