Bereavement book for kids attracts orders from around the world 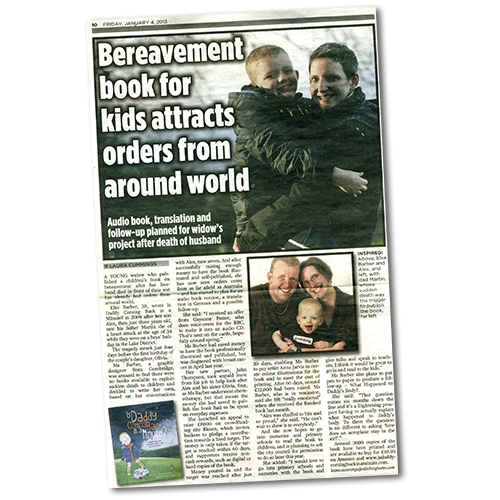 A YOUNG widow who published a children’s book on bereavement after her husband died in front of their son has already had orders from around world.

Elke Barber, 38, wrote Is Daddy Coming Back in a Minute? in 2009 after her son Alex, then just three years old, saw his father Martin die of a heart attack at the age of 34 while they were on a boys’ holiday in the Lake District.

The tragedy struck just four days before the first birthday of the couple’s daughter, Olivia.

Ms Barber, a graphic designer from Gorebridge, was amazed to find there were no books available to explain sudden death to children and decided to write her own, based on her conversations with Alex, now seven. And after successfully raising enough money to have the book illustrated and self-published, she has now seen orders come from as far afield as Australia – and has started to plan for an audio book version, a translation in German and a possible follow-up.

She said: “I received an offer from Gayanne Potter, who does voice-overs for the BBC, to make it into an audio CD. That’s next on the cards, hopefully around spring.”

Ms Barber had saved money to have the book professionally illustrated and published, but was diagnosed with breast cancer in April last year.

Her new partner, John Thompson, took unpaid leave from his job to help look after Alex and his sister Olivia, four, as Ms Barber underwent chemotherapy, but that meant the money she had saved to publish the book had to be spent on everyday expenses.

Money poured in and the target was reached after just 20 days, enabling Ms Barber to pay artist Anna Jarvis to create colour illustrations for the book and to meet the cost of printing. After 60 days, around £12,000 had been raised. Ms Barber, who is in remission, said she felt “really emotional” when she received the finished book last month.

“Alex was chuffed to bits and so proud,” she said. “He can’t wait to show it to everybody.”

And she now hopes to go into nurseries and primary schools to read the book to children, and is planning to ask the city council for permission to do so later this year.

She added: “I would love to go into primary schools and nurseries with the book and give talks and speak to teachers. I think it would be great to go in and read to the kids.”

Ms Barber also plans to put pen to paper to produce a follow-up – What Happened to Daddy’s Body?.

She said: “That question comes six months down the line and it’s a frightening prospect having to actually explain what happened to daddy’s body. To them the question is no different to asking ‘how does an aeroplane stay in the air?’.”

Around 3000 copies of the book have been printed and are available to buy for £10.99 on Amazon.